I always love your parade of trees and wanted to be a part of it. 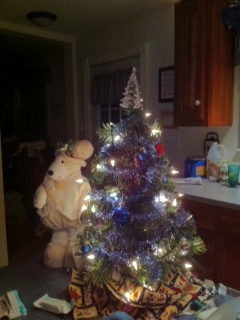 The little one is my kitchen island one, complete with attendant polar bear. 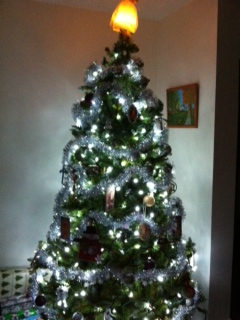 Everything got silver on the big one this year, and I'm not quite sure how that happened.

Grace has taken care of her widowed father her entire adult life and the ornery old goat has finally died. She has no job, no skills and very little money, and has heard her father's prediction that no decent man would ever want her so often she accepts it as fact.

But she does have a big old house on Lawyers Row in Peacock, Tennessee. She opens a rooming house and quickly gathers a motley crew of tenants - Promise, Grace's best friend since kindergarten, who's fighting cancer; Maxie, an aging soap opera actress who hasn't lost her flair for the dramatic; Jonah, a sweet gullible old man with a crush on Maxie.

And Dillon, Grace's brother's best friend, who stood her up on the night of her senior prom and has regretted it ever since. Dillon rents Grace's guest house for the summer and hopes to make up for lost time and past hurts - but first, he'll have to convince Grace that she's worth loving...
lizflaherty.com