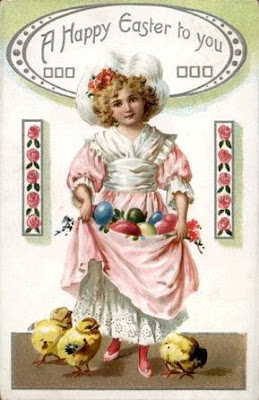 It's another beautiful day! The sun is shining. My office window is open and I can hear roofers hammering a block away--not an irritation, but a sign that Spring is here!
The dog wants to go out a hundred times a day and lays in the open doorway--all morning in the kitchen floor by the glass door where it's sunny, and the rest of the day at the front door where the sun moves.
I'm looking forward to the weekend, but I'm sure enjoying today.
No comments: 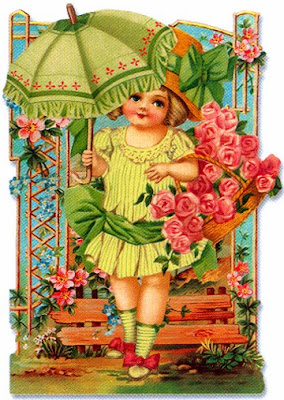 Can't believe it's almost Easter, but I'm looking forward to it. Family dinner at my house, but very untraditional. We're having BBQ ribs. lol
And Easter egg hunt will take place, which should be interesting, because half the kids are teenagers now.
I'll be posting vintage cards and other Easter lovelies all week.
What's cookin' at your place?
Oh, and all week long is a Filly guessing game over at Petticoats and Pistols. You might want to check it out and see if you can guess which one is me.
http://petticoatsandpistols.com/
No comments: 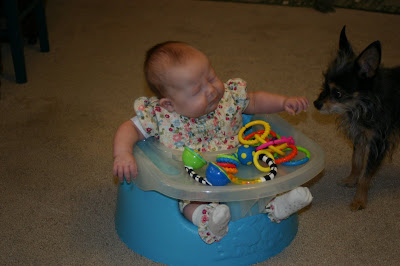 Who's Tuning in to Dancing With the Stars Tonight?

Some seasons I watch, and other seasons no one interests me. Sometimes I think they've really dredged the bottom of the so-called-star pool to come up with these people.

I'll be watching the first episode tonight, however, because they've made it interesting this time. Say what you will, I am a Kate Gosselin fan, so I'll be rooting for her. I also like Nicole Sherzinger and I think Evan Lycechek will be fun to watch. He claims he's not a shoe in because he's used to spinning the opposite direction, but so far skaters have done very well. They're used to the training and the choreography.

Will you watch tonight?
7 comments: 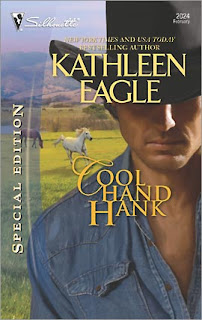 Sally Drexler was always running. The proprietor of the Double D Ranch and wild mustang sanctuary had her hands full keeping health, hearth and horses on an even keel. And though she approached every challenge with her chin high and her spirits even higher, it could get lonely. That's when Hank Night Horse came along, singing her tune.

Hank couldn't help noticing the bride's irresistible sister at his best friend's wedding. But this physician's assistant put rodeo riders back together for a living, and could sense that something about Sally was broken. Was his healing touch what it would take to soothe Sally mind, body and soul…and stop her running?

I wasn't broken-hearted. I wasn't even mildly affected. At first I wondered what was wrong with people when she was in the bottom three and they kept the likes of Tim Urban, but then when Lacey sang, I just plain didn't care. She wasn't that great. There are really only maybe three really good singers, and the rest of this is just idol time (pun intended), waiting for the others to be eliminated.
4 comments: 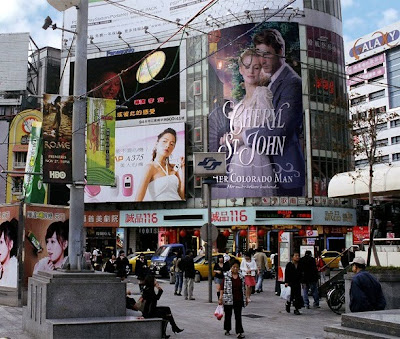 Wendy the Super Librarian chose yet another Blogger Bundle for eharlequin. And here's her selection: 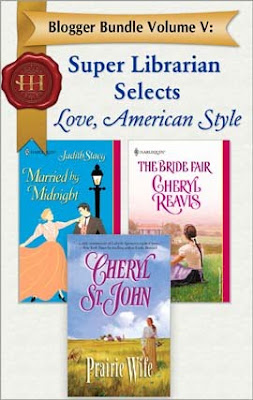 Discover the variety, emotion, and heartwarming stories that these three historical romances set in America have to offer, each personally selected by Wendy the Super Librarian! From a heartbreaking marriage-in-trouble story on the prairies, to the bustling excitement of late nineteenth-century Los Angeles, to the occupied Southern landscape after the Civil War, these stories will make you laugh, cry and smile through your tears. Bundle includes Prairie Wife by Cheryl St.John, Married by Midnight by Judith Stacy and The Bride Fair by Cheryl Reavis. 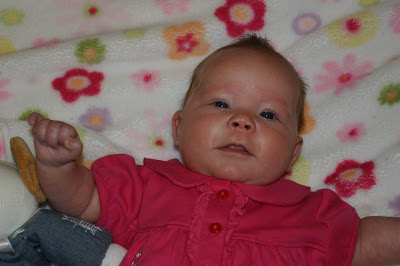 I still stand in disbelief over the fact that the guys were the best the judges could find out of all those thousands and thousands of tryouts. The girls are kicking their butts, and a girl will win.

Katie Stevens attempted to be youthful per the judges advice and sang Kelly Clarkson’s Breakaway. She said she was 8 years old when Kelly became the first Idol winner. It wasn't good. At all. Ellen, Kara and Simon all gave her kudos for the attempt, but “I don't think you know who you are yet as an artist,” said Kara. For some reason Katie reminds me of that girl a couple of seasons ago who cried all the time.


I don't know if Crystal Bowersox is as consistent as she is predictable. She sang Tracy Chapman’s Give Me One Reason in her shades of Janis Joplin voice and played an electric guitar. Simon stated the obvious: “You are the one everyone's going to have to beat … It's yours to lose.” She's good and I like her all right, but there's already been a Janis Joplin and wearing dreadlocks doesn't make her current.


Last week Didi Benami fought tears after the judges tore up her performance. This week they loved it and Kara even called it one of her favorite moments of the season. Didi's only okay for me. She sounds exactly like Megan with the tattooed arm did last year. Eh.

Siobhan Magnus sang, House of the Rising Sun. I love the song, so was waiting to see what happened. She started a cappella. Randy appreciated the surprise in her song choice and interpretation. “You take every risk,” he said. Ellen told her, “You are why I love music — it’s supposed to move you. You’re spectacular.” Simon said it was a bit weird and ploddy and boring. For what it's worth, I liked it and I like her. Those legs just won't quit, will they? Kara calls everyone else adorable--the guys--but Siobhan is adorable.

I've liked Lacey Brown since the beginning. She sang one of my favorite songs, one I listen to all the time--Brandi Carlile’s The Story. When Ryan introduced the song I was prepared to cringe, because I love Brandi Carlile so much. I was pleasantly surprised when she sang. She did a really really good job, and she always does a good job. She's consistent. The song was cut short to fit the time frame, and it's probably a good thing because she probably couldn't have done the amazing things that Brandi does with the middle of that piece. The judges agreed it was Lacey's best performance. Simon was more reserved, but admitted: “That to me was like listening to something on the radio.” I love her hair, what can I say?

Lilly Scott with her white hair and feathers was lame. Simon thought her rendition of Pasty Cline’s I Fall to Pieces lacked the wow factor, but the others like it. I'm sure the fact that she followed a few really good performances made her sound even more pathetic and boring. Kara said “You kind of made Patsy Cline feel current.” I disagree. She clobbered a song that is good the way it was fifty years ago. I'd rather watch Jessica Lange lip sync it.

Last week Katelyn Epperly’s performance was criticized for being corny. She played the piano and sang to the camera. This time I Feel the Earth Move wasn't much better. Her hair, which Simon liked, was ridiculous and looked like a wig she slammed on her head. Randy called it Carole King hair--not even close. She's not Carole King, because if she was, we wouldn't have fallen asleep while she sang the snoozer.

The worst might have been Paige Miles, singing Smile. The judges didn't even want to talk about it afterward. Loo-oo-ser. I look for her to get the boot - and probably Katie.

My money is on Lacey and Siobhan in the top three. As soon as the numbers are down to 12, they'll be getting coached and advice on wardrobe, etc., so they'll shine even more brightly. But please don't change Lacey's hair!
2 comments:

Danny Gokey's Best Days Are Ahead of Him 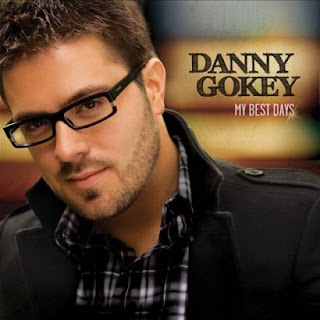 Surprisingly to me, his new album has a country flavor, which Danny said was inspired and suggested by Randy Travis last season. If this song was an indication, it's not gag-me country, but more contemporary sounding. I like a few country artists, like Sugarland--who Danny just happens to be opening for on their tour which starts tomorrow! But I'm not a twang or a steel guitar fan. I still can't believe Kelly Pickler didn't get an early boot on AI, and I still think she stinks.

Anyway, back to Danny. I am definitely going to get his CD, I just have to decide if I want the immediate satisfaction of an itunes download or an album cover. Hmmm.

And speaking of American Idol... you cannot tell me that out of all the thousands and thousands of hopefuls who tried out for the show this year, that those guys were the best the judges could come up with? Pu-leeze. They are awful. And most of the girls aren't that good, either. What happened? At least on So You Think You Can Dance, the competition keeps gets stronger. I'm afraid that when they let Paula go, they also forgot about quality.

Ellen is funny, and I'm not disliking her. Kara is growing on me. But the contestants? I'm not even excited to watch. I don't care who leaves. 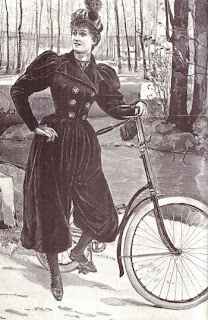 FYI I'm over at Petticoats and Pistols today, talking about the Olympic let down and sporting competitions in the 1800s.
No comments: