A celebration of two new sweet historical romances by Shanna Hatfield
Today, anyone driving through Eastern Oregon on the freeway will travel right past a small city nestled in a beautiful valley. Many may not know that the town of Baker City, Oregon, was once referred to as the "Denver of Oregon." Back in the day, you could reach Baker City by wagon or train. The region saw a rush for gold in the 1860s then again in the 1890s. In fact, the population was 2,600 in 1890, then boomed to 6,600 by 1900. During that time, buildings constructed of brick and native tuff stone quarried at Pleasant Valley to the south replaced all the downtown frame buildings.

The most impressive brick building still standing on Main Street is the elegant Geiser Grand Hotel, which the Warshauer brothers, Jake and Harry, constructed in 1889. It went by the name Hotel Warshauer until purchased by the Geiser family about 1900. The hotel offered a "fine" restaurant and featured a stained glass ceiling on the second floor that continues to be a showpiece of the building even today. You can read a little about the hotel and life in 1890 Baker City in Crumpets and Cowpies, the first book in the Baker City Brides series.

In the story, rancher Thane Jordan reluctantly travels to England to settle his brother’s estate. He quickly discovers he's inherited much more than he could possibly have imagined, including a niece and nephew he didn't know existed. The children's aunt, Lady Jemma Bryan has no desire to spend a single minute in Thane Jordan’s insufferable presence much less live under the same roof with the handsome, arrogant American. Forced to choose between poverty or marriage to the man, she travels across an ocean and America to reach his ranch in Oregon. While I was researching history for the book (and series), I discovered a wonderful online resource with the Baker County Library. There are thousands of historic photos available for viewing on their website. Here are a few of my favorites:

The town of Baker City, sometime around 1900. The building on the far left has "Paints, Oils, Glass, Cameras" painted on the side. The next sign down the street says "Groceries, Hay & Grain." Wonder if they sold groceries and feed in one store? Also, notice the width of the street.

This is a sprinkler wagon that drove up and down the streets, dripping out water to settle the dust.

And this was the saddle and harness shop. They carried a line of sewing machines as well as tack. You can see one in the far left side of the photo in front of the display case. It seemed like such an odd combination of wares to me.

The bakery featured a number of display cases full of delicious treats. (Yum!)

The Crystal Palace carried lamps, dishes, clocks, along with many other interesting items. Find out more about Baker City (at least through my fictional lens) in the Baker City Brides series ...

The second book in the Baker City Brides series releases Thursday, April 9! Thimbles and Thistles takes readers back to Baker City as spring arrives and love is in the air. You can reserve your Kindle copy here: http://amzn.com/B00TCV6BFG Maggie Dalton has no need for a man in her life. Widowed more than ten years, she’s built a successful business and managed quite well on her own in the bustling town of Baker City, Oregon. Aggravated by her inability to block thoughts of the handsome lumber mill owner from her mind, she renews her determination to resist his attempts at friendship. Full of Scottish charm and mischief, Ian MacGregor could claim any available woman in Baker City as his own, except the enchanting dress shop owner who continues to ignore him. Not one to give up on what he wants, Ian vows to win Maggie’s heart or leave the town he’s come to love.

Lacy, Book 5 in the Pendleton Petticoats series, will be available for pre-orders April 9. Be among the first to order the long-awaited story of Grant Hill. Talk about losing at love... eligible banker bachelor Grant needs to find the right girl. Those attending the party will also get a first look at the cover! "Will the bonds of love be stronger than the bonds of tradition..."   It just wouldn't be a party if there wasn't a book available for free!

Aundy, Book 1 in the Pendleton Petticoats series, will be available for free Kindle downloads April 9. Make sure you grab your copy! If you've already read it, tell your friends to download it. If you haven't met the characters from Pendleton Petticoats, here's a brief intro: Aundy (Book 1) - One stubborn mail-order bride finds the courage to carry on when she's widowed before ever truly becoming a wife, but opening her heart to love again may be more than she can bear.

Caterina (Book 2) - Frantic to escape a man intent on marrying her, Caterina starts a new life in Pendleton, completely unprepared for the passionate feelings stirred by the town's deputy sheriff.

Ilsa (Book 3) - Tired of relying on others to guide and protect her, Ilsa finally finds the strength and courage to take control of her life. Unfortunately, her independence drives a wedge between her and the man she's come to love.

Marnie (Book 4) - After giving up on her dreams for a future, Marnie finds her hope rekindled by one caring,compassionate man and the orphans who need her.

Dust off your dancing shoes and choose your formal attire for the Petticoat Ball Party on Facebook April 9, 2015 from 10 a.m. to 2 p.m. Giveaways and games will make for a splendid event as we celebrate the release of Thimbles and Thistles and the debut of Lacy! The talented and fabulous guest authors joining in the shenanigans include: 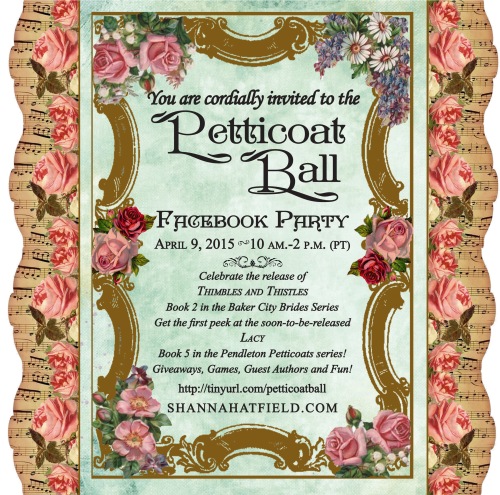 Invite your friends to the party, and you could win a $25 Amazon Gift card. Go to the Facebook Party Page, click on the "invite" button, invite your friends, then post how many you invited. One randomly drawn person will win, but you get additional entries for every 25 people you invite! Also, ask your friends when they join the party to share that you invited them on the party wall. Each friend who mentions your name, earns you another entry in the contest! The winner will be announced prior to the start of the party April 9th.

A hopeless romantic with a bit of sarcasm thrown in for good measure, Shanna Hatfield is a bestselling author of sweet romantic fiction written with a healthy dose of humor. In addition to blogging and eating too much chocolate, she is completely smitten with her husband, lovingly known as Captain Cavedweller. Shanna creates character-driven romances with realistic heroes and heroines. Her historical westerns have been described as “reminiscent of the era captured by Bonanza and The Virginian” while her contemporary works have been called “laugh-out-loud funny, and a little heart-pumping sexy without being explicit in any way.” She is a member of Western Writers of America, Women Writing the West, and Romance Writers of America.