I'm holding a drawing for all three books in the Irish Brides trilogy at Petticoats and Pistols today: http://petticoatsandpistols.com/2012/03/30/cheryl-st-john-bleeding-hearts-and-a-drawing/
3 comments: 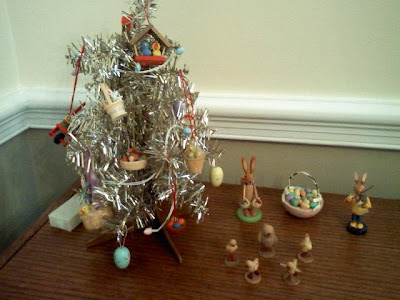 Chris always shares her Christmas trees and collections, and this Spring she's sharing her Easter things. Above are wooden ornaments Chris got when they were stationed on Germany. 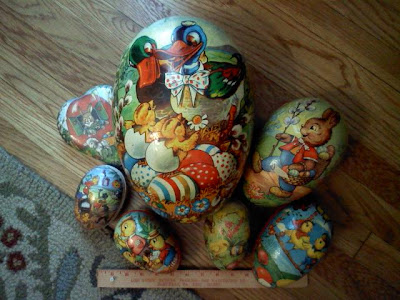 Colorful cardboard eggs! Check out the size of these compared to the ruler!
3 comments:

I ran across this site of wedding photographs taken at a ghost town, Pretty cool. 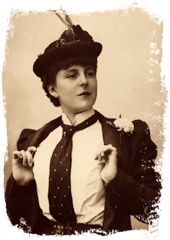 Throughout American history until the early twentieth century, women’s clothing was restrictive and cumbersome.  Corsets, stiff petticoats, crinolines, hoop skirts, bustles and busks were all designed to cinch, pad, flounce and lift, sometimes in layers, often in uncomfortable fabrics, draped and shirred and pleated to add even more weight.  Some of those styles were downright unhealthy!

One of the first women who chose more comfortable clothing was British-born Fanny Kemble, daughter of touring actors who married a plantation owner.  Critics were outraged over Fanny’s loose fitting pants that she wore under a skirt that came to her knees.  But coming to her defense on the pages of her Seneca, NY newspaper The Lily was Amelia Bloomer.

Born Amelia Jenks, she married Dexter Bloomer in 1840.  Dexter was an attorney and a publisher of a county newspaper.  When Amelia first wrote for his paper, she took up the cause of temperance.  In 1849 Amelia took over The Lily, a temperance newspaper.  Influenced by Elizabeth Cady Stanton, Amelia addressed issues of women’s rights, educating women about inequality and the possibility of social reform.  The paper became a model for other suffrage periodicals.

Amelia, along with Elizabeth Cady Stanton and Susan B. Anthony, adopted the mode of dress sometimes called the new American Costume.  The style was also referred to as Turkish pantaloons.  When Amelia staunchly defended the clothing, other papers picked up the story, referring to their clothing as bloomers.  Eventually Stanton and Anthony agreed to forgo wearing bloomers so that their cause wasn’t seen as a mere dispute over clothing.

You might recall another woman who started a trend nearly a century later: the lovely Kathryn Hepburn wore trousers with stylish disregard for what was considered appropriate.  However Hepburn’s popularity and intelligence soon aided a style revolution that the country--and women--were ready for.

Later Amelia and her husband moved to Mount Vernon, Ohio and in 1855 to Council Bluffs, Iowa, where she continued to write and speak on the issues of women’s rights.  When age caught up with her, she left the battle for equal rights to her successors.

Throughout the Village of Seneca Falls, NY there are bronze statues and monuments that bring the women's movement to life.  One in particular is a real car stopper: Life sized sculptured figures of Elizabeth Cady Stanton, Susan B. Anthony, and Amelia Bloomer.  I would love to see these in person!

Not only are these women shining examples of the courage and tenacity it took to win equal rights for the sexes, but they pointed out the foolishness of nonfunctional clothing and changed the way people thought about fashion.

Stuck for a blog? 22 Ways to Create Compelling Content