Christmas Gold had been out of print for far too long before Harlequin Historicals brought it out in Kindle version. Here's your opportunity to pick up a reader favorite for your Christmas reading pleasure. 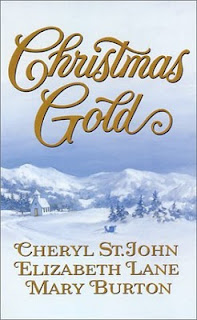 "Colorado Wife" by Cheryl St. John. In 1875 Needle Point, Colorado, Rosalyne Emery decides that local businessman Sam Calhoun needs to take on the obligation of caring for the two preadolescent orphans she found freezing outside her restaurant. Instead Rosalyne and Sam end up in a pretend engagement that is heated by their true feelings for one another. Will the mogul realize how vacuous his vision for the town and himself is by accepting the Yuletide present of three people who dearly love him and want him to love them?

"Jubal's Gift" by Elizabeth Lane. It took Jubal Trask almost a decade to find Thomas Curry who deserted him at Sharpsburg during the great war. However, now in 1873 in the Arizona Territory trading post, Jubal has caught up with the man he wants to kill. Instead of finding his intended victim who is away obtaining supplies, Jubal meets Thomas' sister Tess, who he knew from before the war, and his enemy's two young children, Lucy and Beau. However, it is hard to kill even a man you despsie when you love his sister.

"Until Christmas" by Mary Burton. In 1882 Timberline, Colorado, a depressed owner Laura Butler wants to sell her silver mine following the tragic death of six workers as she knew each of the deceased personally and sewed alongside their wives. Laura jut wants to go east, but her mine manager Roman Maddox wants to comfort her forever, but has only a couple months to persuade his beloved to be his wife.

These three late nineteenth century Americana romances are well written, warm holiday treats that fans of the sub-genre will take immense pleasure form reading. The stories contain delightful lead couples and strong supporting players that enable the audience to enjoy the Christmas holidays in the old west.
- Harriet Klausner
BUY WITH ONE CLICK!
No comments:

Donna Alward: How a Cowboy Stole Her Heart 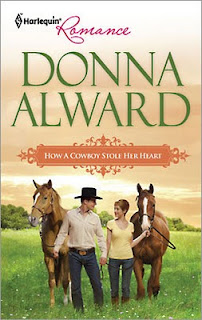 Clay Gregory's known Megan Briggs her whole life, and he's been plenty worried about her while she's been getting medical treatment. Now she's back home and hiding away on the family ranch.

Knowing the stubborn cowgirl won't accept his help willingly, he invites her to a family wedding to help him avoid his aunt's matchmaking!

He plans to remind Meg she's still the girl who can beat him in a horse race! But as she steps out in her curve-hugging red dress, her skills on a horse are suddenly the furthest thing from his mind….

American surgeon Caitlin O'Donahue nearly lost her life doing volunteer work in El Salvador. She escapes to her childhood ranch to discover her father is in hiding. Now the place that was once safe seems dangerous. The only man she can trust is stranger Rhett Kane, a gorgeous rancher with an agenda and deep-set secrets.

Email ThisBlogThis!Share to TwitterShare to FacebookShare to Pinterest
Cheryl, thanks for inviting me over. We’re giving away a copy of Captive Trail today.

Captive Trail is second in a six-book series about four generations of the Morgan family living, fighting, and thriving amidst a turbulent Texas history spanning from 1845 to 1896. Although a series, each book can be read on its own.

Taabe Waipu has run away from her Comanche village and is fleeing south in Texas on a horse she stole from a dowry left outside her family’s teepee.  The horse has an accident and she is left on foot, injured and exhausted.  She staggers onto a road near Fort Chadbourne and collapses.

On one of the first runs through Texas, Butterfield Overland Mail Company driver Ned Bright carries two Ursuline nuns returning to their mission station.  They come across a woman who is nearly dead from exposure and dehydration and take her to the mission.

With some detective work, Ned discovers Taabe Waipu’s identity. He plans to unite her with her family, but the Comanche have other ideas, and the two end up defending the mission station. Through Taabe and Ned we learn the true meaning of healing and restoration amid seemingly powerless situations.

I’m thrilled to be part of the Texas Trail Series, with Vickie McDonough and Darlene Franklin. Each of us has contributed two historical novels to the series for Moody Publishers.

This series spans a broad time period of Texas history—from the 1840s to the 1890s. Each of us wrote about members of the Morgan family. 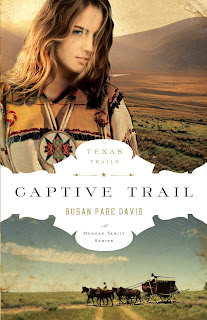 The first book, Lone Star Trail, by Darlene, is on shelves now. It focuses on Jud Morgan. His father died for Texas's freedom during the war for independence. So when the Society for the Protection of German Immigrants in Texas attempts to colonize a New Germany in his country, Jud takes a stand against them. But he wasn’t counting on Wande Fleischer stealing his heart. Wande is sweet and cheerful as she serves the Lord and all those around her. Can the rancher put aside his prejudice to forge a new future?

This series was put together by our agent, Chip MacGregor. Each of us looked at a Texas timeline and chose historical events that we wanted to write about. It was an education for me, and I’ve since read some books on Texas history, as well as a lot of material specific to my stories.

My research books include ones about the Comanche Indians and some of their captives, The Butterfield Overland Mail stagecoach line, Texas flora, Cowboys and cattle ranches, as well as women’s role in Texas history. My next book in the series will be Cowgirl Trail, coming next spring.

Come join the fun! And be sure to enter the giveaway for Captive Trail below. To learn more about the series, visit www.texastrailsfiction.com –and I’d love to see you at my own site, www.susanpagedavis.com, where I have a monthly drawing for books.