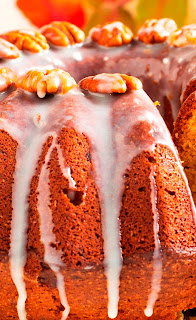 Bake 1 to 1 1/4 hours or until a toothpick inserted in the center comes out clean. Let cool on a wire rack for 15 minutes. Remove from the pan and let cool completely.

Glaze & garnish:
Combine powdered sugar and 1 Tblsp buttermilk in small bowl, stirring until smooth. Place the cake on a serving plate and drizzle the glaze over the top; garnish with chocolate chips or chopped nuts while the glaze is still moist. 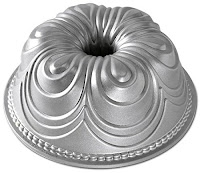 I have a whole STACK of gorgeous Bundt pans!
They make beautiful cakes. 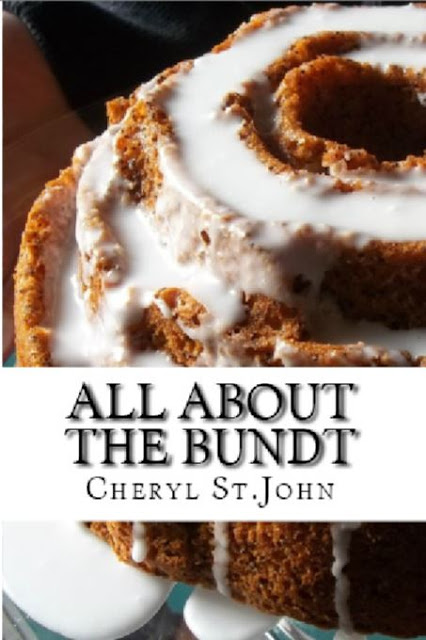 After years of being asked for recipes, Cheryl St.John spent a summer writing down ingredients and baking times, baking and asking for beta testers in order to put together this collection of mouthwatering recipes for Bundt cakes.

Many of the recipes are labeled NO SKILL REQUIRED, indicating exceptional ease of preparation. If you don’t consider yourself a baker or if you’re an accomplished baker and simply want a quick recipe, you will find these cakes using box mixes are convenient and delicious. You don’t have to tell anyone you started with a mix—the cakes are so good that no one will guess preparation didn’t take hours. Bake with ease and enjoy serving a beautiful cake to family and friends.


Cowboy Creek:
Bringing mail-order brides, and new beginnings, to a Kansas boomtown​
An exciting new trilogy from Love Inspired Historical and three of your favorite authors! 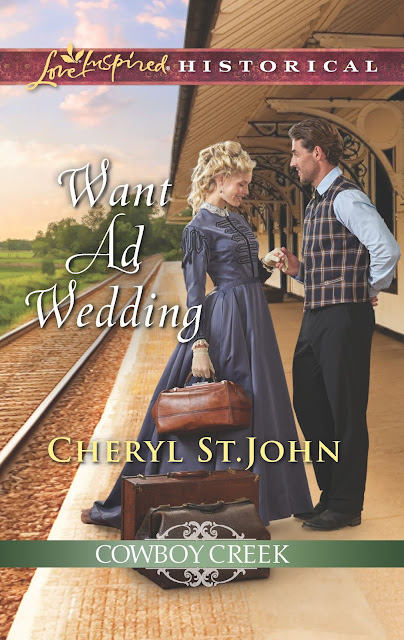 When Daniel Gardner convinced the residents of his Kansas boomtown to advertise for mail-order brides, he never expected the woman he once loved to respond. But Leah Swann steps off the bride train…pregnant and widowed and in need of a husband. Drawn to protect his fragile childhood friend, Daniel proposes a marriage of convenience.

Seeing her onetime best friend waiting to meet the bride train is a wonderful shock for Leah. After her first rocky marriage, a practical partnership with Daniel sounds perfect—as long as her heart doesn't get involved. But when she starts to fall for her husband, will her plans of a fresh start be ruined…or is a real marriage to Daniel exactly what she needs? 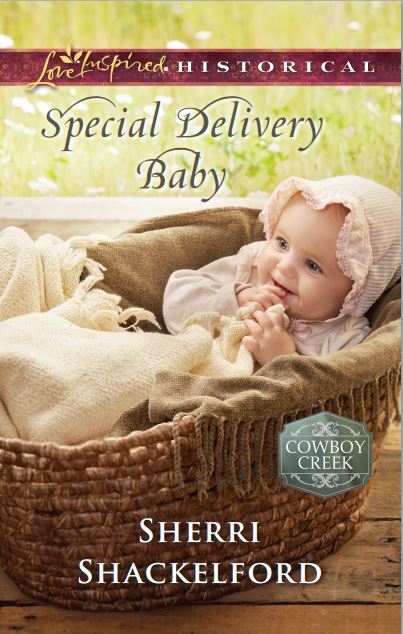 An abandoned baby is the last thing town founder Will Canfield expects on his doorstep. He's not the father—and the mother's unknown. But the precious little girl needs a protector. And Will never backs down from a challenge, even if it means caring for a newborn…or dealing with spitfire cattle driver Tomasina Stone.

With her father gone, Tomasina's trail life has ended. Yet becoming a polished city lady feels far out of her reach. All she wants is a place where she'll be appreciated, respected…maybe loved. And the more time she spends helping Will care for the baby, the more she wonders if she's found it. She's never wanted to settle down…but Cowboy Creek—by Will's side—might finally give her heart a lasting home.

Newly minted Cowboy Creek sheriff Noah Burgess doesn't want a wife—despite his friends insisting that he needs one. So when they send for a big-city single mother to be his mail-order bride, he's fit to be tied. Even if vivacious Grace Longstreet might just be the only person who can see past Noah's scars…and help him heal.

Grace needs a husband to keep her and her twin daughters out of her brother-in-law's grasp. And she'll do anything—including taking on her cousin's identity—to find one. But as the attraction between Grace and the lawman sparks higher, she begins hoping for a real marriage. So she needs to tell the truth…or a mail-order match that's meant to be could crumble.

A couple of years ago, I wrote an article on the 10 best pieces of writing advice that I had received during my career, so this month I thought I'd review the 10 Worst Pieces of Writing Advice I've Received. The following bits were dispensed by well-meaning writers and industry professionals in workshops, roundtable discussions, and private conversations, and their names shall remain anonymous.

Worst Advice #2:  Forget about writing chapters, instead concentrate on writing scenes.  Sure, if you have lots of extra time on your hands to go back later and group the scenes into chapters, only to find that you need transitions to make them flow seamlessly.  File this one under "P" for "Please Make My Life More Complicated."

Worst Advice #3:  Critique groups are dangerous.  Not true, unless your critique partners have criminal records. Otherwise, the right critique group will help to keep you motivated and productive. Plus, critiquing other writers' work will make you a stronger writer.

Worst Advice #4:  Write the book of your heart.  Go ahead. Then put a big bow on it and give it to your mother for Christmas, because no one else will be interested in reading it, much less buying it. Before you begin your second project, analyze your strengths and marry them to the market, then find a way to make that sellable idea the book of your heart.

Worst Advice #5:  Don't pitch a series for your first book.  The previous wisdom was that an editor will hesitate to buy a series from a new writer because if the first book bombs, the rest of the series is doomed. But editors now recognize that a series is the quickest way to build readership, so if you have a good idea for a series, go for it.

Worst Advice #6:  Don't allow an editor to change your work.  Wrong. Remember that you're writing for a worldwide audience—let your editor do her job as long as she isn't nitpicking your work to death. She just might be making your work more sellable to other markets.

Worst Advice #7:  Don't befriend your editor.   Wrong again. It's not a good idea to become best-buddy confidantes, but you should strive for a professional friendship with your editor. This industry is complicated and frustrating—it's always nice if you're conducting business with someone you actually like, and vice versa. Remember that an essential ingredient in a successful career is an editor who champions your work.

Worst Advice #10:  If your agent refuses to send out a project, send it out yourself.  STOP! Either 1) trust your agent's expensive advice, or 2) get a new agent. 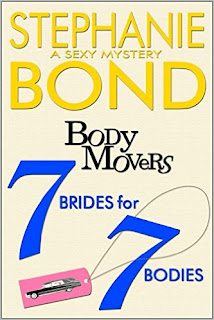 Carlotta Wren's life has taken a startling turn--she's not sure what's going to happen next. So when her retail job temporarily plants her in the world of wedding planning, she's happy for the distraction--at first. Because the happily-ever-after setting only heightens the stress surrounding the decisions she faces about her romantic life. The three hot men vying for her attention aren't going to wait forever for her answer.

Stephanie Bond was several years into a corporate computer programming career when an instructor in her night school MBA program remarked she had a flair for writing and encouraged her to submit one of her projects to academic journals. "But," Stephanie says, "all I could think was 'I wonder if I could write a romance novel?' "

She spent every spare moment the next couple of years writing and submitting manuscripts before selling her romantic comedy IRRESISTIBLE? to Harlequin books. After selling ten projects in two years, Stephanie walked away from her corporate career to write commercial fiction full time. To date, she's published over 70 romance and mystery projects with Random House, St. Martin's Press, HarperCollins, Mira Books, and more recently, under her own imprint.

Stephanie's independently published romantic comedy STOP THE WEDDING!, a Kindle bestseller in three languages, is currently in development at The Hallmark Channel for a 2-hour movie.

Stephanie lives in midtown Atlanta and is probably working on a story at this very moment.  For writing tips and a daily writing blog, visit www.stephaniebond.com.

This article appeared in the February 2005 issue of the Galley, Georgia Romance Writers' monthly online newsletter. Permission is granted to sister RWA® chapters to reprint with credits to author and chapter.
1 comment:

Who doesn't love a Bundt cake? It's all about the Bundt!

The American Table did a piece on The original Tunnel of Fudge Cake.
here's a link:

A bit of fun history!

And a link to my Bundt cake book
ORDER ON AMAZON 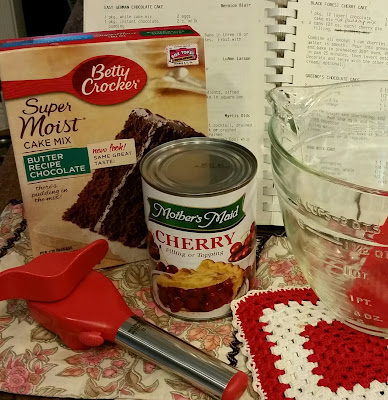 After years of being asked for recipes, Cheryl St.John spent a summer writing down ingredients and baking times, baking and asking for beta testers in order to put together this collection of mouthwatering recipes for Bundt cakes. Many of the recipes are labeled NO SKILL REQUIRED, indicating exceptional ease of preparation.

If you don’t consider yourself a baker or if you’re an accomplished baker and simply want a quick recipe, you will find these cakes using box mixes are convenient and delicious. You don’t have to tell anyone you started with a mix—the cakes are so good that no one will guess preparation didn’t take hours. Bake with ease and enjoy serving a beautiful cake to family and friends.

On sale this week: The Unexpected Bride by Lena Goldfinch

The Unexpected Bride (Book 1 in The Brides Series)


What's a man to do when his father orders him a bride? 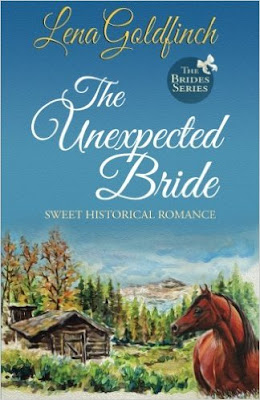 If logging-operation owner Isaac Jessup had wanted a bride, he'd have chosen a sturdy frontier woman, not some fragile lady from back East. Ready to explain the mistake, honorable Isaac takes one look into Rebecca's vulnerable eyes...and knows he'll marry her, even though this delicate waif is obviously unsuited for wild Seattle.


Could an unexpected marriage be a match made in heaven?

When Becky becomes Isaac’s mail-order bride, their new life together holds surprises for them both.