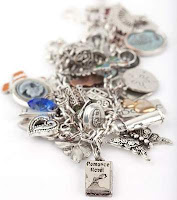 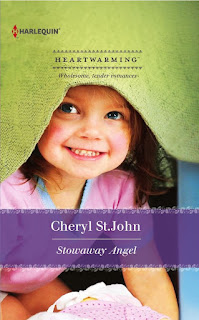 Charlie McGraw never should have bought the angel book for his precocious daughter. Because then Meredith wouldn't be convinced that getting a new mommy was as simple as having an "angel" sprinkle him with her "miracle dust." And she never would have believed the beautiful blond-haired woman who drove a truck called the "Silver Angel" was some treetop angel come to life.

Starla Richards was no angel. But try telling that to a five-year-old who was so starved for a mother's love that she'd stowed away on Starla's rig. Or convincing herself that miracles just didn't happen to ordinary people when Starla found herself snowbound with a handsome, caring widower and his adorable daughter….

Revised for the Heartwarming line from a previous SIM edition, Charlie's Angels 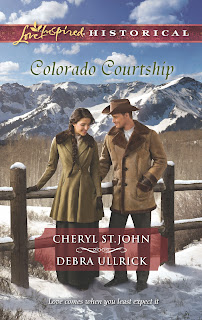 
If Violet Kristofferson had known that her new employer was the town undertaker, she might never have come to Carson Springs as his cook. Yet she needs a fresh start away from scandal. And Ben Charles’s unflinching faith could be her path to something truly precious—a new family.

The Irish Brides trilogy was so much fun to work on, with authors Renee Ryan and Winnie Griggs. Our assignment was to tell the tales of three sisters coming to America to discover the secret of a mysterious inheritance. Follow them from Castleville, Ireland as they make their journey to Boston Harbor and the coastal village where they hope to unravel the mystery of the man who loved their mother. We enjoyed working together on this project, and our first glimpses of these covers took our breath away. 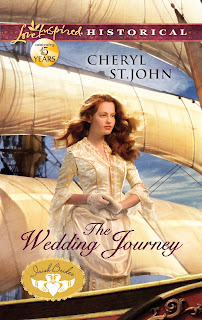 The mysterious inheritance is the answer to a prayer. Now Irish lass Maeve Murphy and her sisters can come to America. She's sure happiness awaits her, even if it won't--can't--come from widowed ship doctor Flynn Gallagher. Yes, he made her his assistant, but she's not foolish enough to fall for the man all the eligible, wealthy female passengers admire.

Flynn Gallagher may have his pick of ladies, but only one cares as he does for the sick and poor. Flynn vowed never to marry another woman who would break his heart. With Maeve, has his heart found safe harbor at last?


ORDER THE WEDDING JOURNEY FROM AMAZON

The Wedding Journey is Book One in the Irish Brides Trilogy. In May, Renee' Ryan's Mistaken Bride is the story of middle sister Bridget. June brings A Baby Between Them by Winnie Griggs. 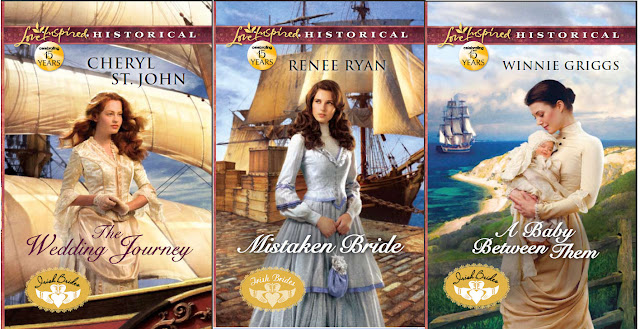 Free! Read the prequel to the Irish Brides trilogy

Their shared concern for the laddie quickly turns into something more--read the entire FREE story on the Page Tab!
Around the Blogosphere
and talking about the Irish Brides, about writing, about heirlooms, about this and that.

Any Pinterest junkies out there? Here are my boards: CLICK HERE TO FOLLOW ME
Pinterest should come with a warning, like nicotine or a sharp curve in the road. "Starting a board may be hazardous to your sleep and productivity. Proceed with caution." 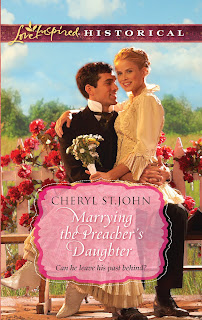 Readers who remember The Preacher’s Wife, the story of Samuel Hart who lost his wife during a wagon train trip west and married Josie to make her the mother of his three daughters have been asking for more stories about the Hart family. Marrying the Preacher’s Daughter is the oldest daughter, Elizabeth’s story. I thought a long time before I came up with the perfect man for her. The perfect man for a fun story was the least compatible person I could think of for a preacher’s daughter: A bounty hunter.
Bounty hunting was just a job for Gabe Taggart—one he needed to fund his sister's education. But now  Gabe is ready to settle down and set aside his past. His adventuring days are over…until his intervention in a train robbery leaves him injured, under Elizabeth Hart's care. Despite his plans for a quiet life, antagonizing his feisty caretaker is the most fun Gabe's ever had. Elizabeth provokes him, too, with her strong mind, kind heart and high principles. Gabe hopes to win her love, but will his dark history bar him from marriage to the preacher's daughter? 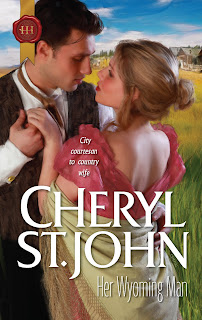 The titles with men in states continue! (Previously: Her Montana Man, Her Colorado Man) The books are not connected, but editorial loves this twist and apparently marketing believes my books are recognizable by the titles. For me the title is secondary to this amazing cover. I love the beautiful colors.

Courtesan Ella Reed escapes dangerous city life to rural Wyoming and says "I do" to a marriage of convenience! But she may not live the life of a respectable woman for long if she can't keep her past—and her heart—under lock and key.

For a self-made man with political aspirations, love is trivial in a paper marriage. Nathan Lantry needs a wife to secure his election and manage his rowdy little boys. Yet he can't stop wanting more from his irresistible new bride. Then her secrets start to unravel….

Her Wyoming Man was so much fun to write! I have two favorite themes I like to read and write: a character pretending to be someone he or she is not – and – a fish out of water. This story is both. Readers are already telling me it’s among their favorites of my books. 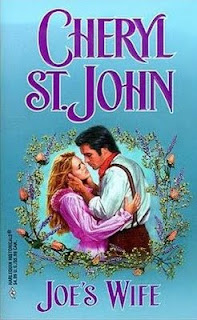 I’m excited about the digital release of a reader favorite and a book that’s been out of print for years. I diminished my own supply long ago by sending out one book at a time to readers who couldn’t find a copy.

Tye Hatcher loved Meg Telford since they were very young, but he’s a bad boy from the wrong side of town, and she was in love with golden boy Joe Telford, a man who was everything Tye is not…a man who deserved a wife like her.


When Meg approaches Tye and asks him to work the farm with her—marry her to keep the land and prevent tongues from wagging, he can’t say no.

Now he’s married to the woman who has his heart…but he’s living in the shadow of another man. Tye will move heaven and earth to win her love—but will his efforts be enough?

WHAT READERS AND REVIEWERS HAVE TO SAY ABOUT JOE’S WIFE:

“Joe’s Wife is really Americana and treats the very real suffering after the Civil War. I loved this book! A three hanky read.”
- Ellen Micheletti, Laurie Likes Books (All About Romance)

“St.John proves again why she is one of the romance world’s favorite authors.”
- Sharon Gallagher Chance

“Joe’s Wife deserves a place on your keeper shelf.” – Carol Carter, Bookbug on the Web

“A powerful exploration of the mores of society and the power of love…a voyage into grief and the nature of healing.”  - Vicki Badik, Calico Trails

“A hero to die for!” – Romancing the Web 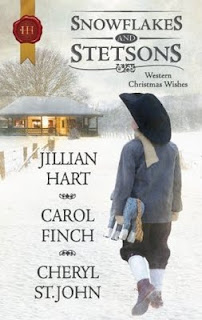 SNOWFLAKES AND STETSONS is the Harlequin Historical Christmas anthology, with my novella, A Magical Gift at Christmas.

It’s a train robbery story, in which a socialite and a U.S. Marshal are snowbound in the Rockies—with two young runaways.


email me any time:
SaintJohn@aol.com