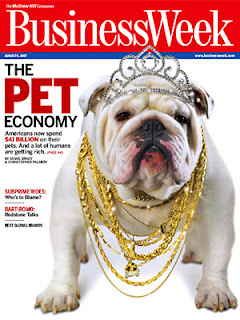 Americans now spend $41 billion a year on their pets—more than the gross domestic product of all but 64 countries in the world. That's double the amount shelled out on pets a decade ago, with annual spending expected to hit $52 billion in the next two years. That puts the yearly cost of buying, feeding, and caring for pets in excess of what Americans spend on the movies ($10.8 billion), playing video games ($11.6 billion), and listening to recorded music ($10.6 billion) combined.

The rising status of pets has started an unprecedented wave of entrepreneurship in an industry once epitomized by felt mice and rubber balls. There are now $430 indoor potties, $30-an-ounce perfume, and $225 trench coats aimed solely at four-footed consumers and their wallet-toting companions. Even those who shun animal couture are increasingly willing to spend thousands on drugs for depression or anxiety in pets, as well as psychotherapy, high-tech cancer surgery, cosmetic procedures, and end-of-life care. About 77% of dogs and 52% of cats have been medicated in the past year, according to APPMA, an increase of about 20 percentage points from 1996.

And for some pet lovers, no medical procedure is too extreme. Plastic surgeons offer rhinoplasty, eye lifts, and other cosmetic procedures to help tone down certain doggy features, from droopy eyes to puggish noses. Root canals, braces, and even crowns for chipped teeth are also becoming more popular.