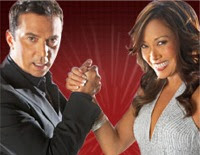 Hoofers go toe to toe on this six-week series hosted by Drew Lachey. Based on the BBC program Dance X and spun from Dancing With the Stars (on which Lachey reigned supreme), the series stars Bruno Tonioli and Carrie Ann Inaba, both of whom were judges on the popular DWTS.

They’re also renowned choreographers, and they’ll be putting their dance smarts to the test as they search for America’s most talented amateur performers who can both dance AND sing. The two will create rival teams and battle it out on the dance floor.

The format follows similar reality shows, where the top 12 contestants are divided into two teams led by Bruno and Carrie Ann. The fate of the teams is up to viewers, who’ll vote for their favorite group each week. The captain of the lowest-scoring group -- whether it be Bruno or Carrie Ann – will choose one of their performers for elimination.

The winners get a life-altering prize: the chance to tour as the opening act for a major performing artist and start a new career as part of a new singing-and-dancing act.

I wasn't sure about this - this was my first season to watch dancing With the Stars, though, and I loved it. I recorded Dance Wars tonight and have watched half - the auditions where they narrow down the contestants. Not nearly as painful or mocking as American Idol. So far, so good.

Off to watch the rest before bed.