History and Tradition of the Christmas Tree

The Santa and sleigh were from my Grandma St.John's tree. 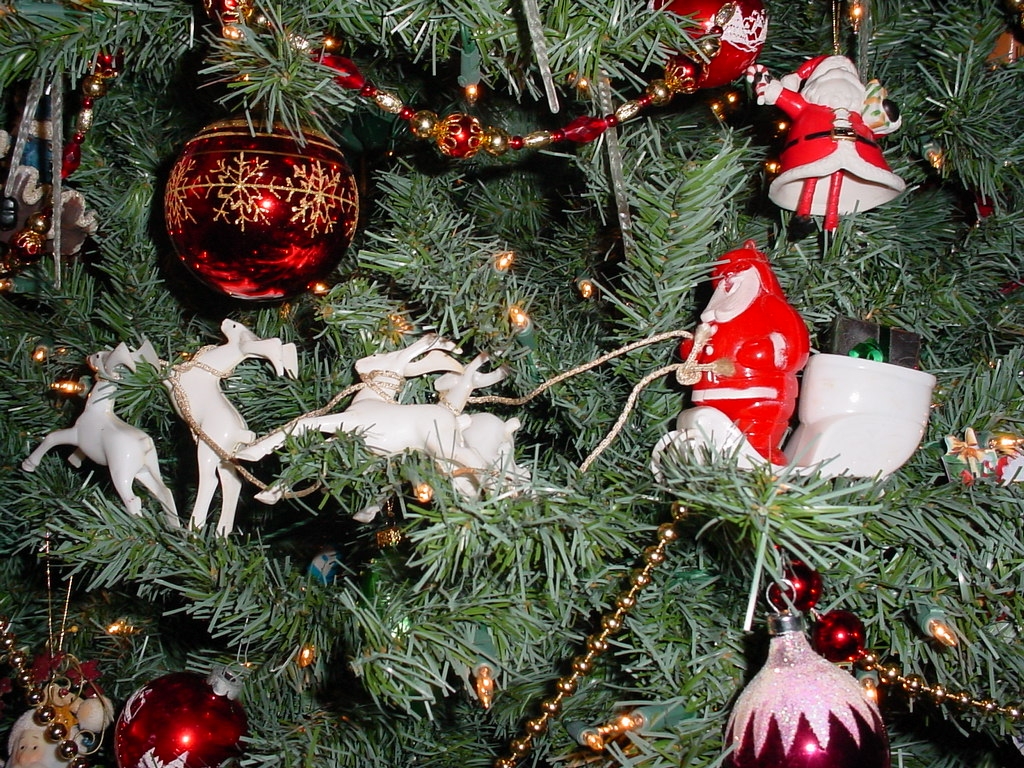 I love this time of year, especially because I love Christmas trees and all the decorations. I’ve been working on thinning out my storage room, since I had enough ornaments to decorate trees with six different themes. I used to put up four trees, but we’ve downsized and I have to get my mind around the fact that I need less.

Every year since our children were small, we’ve spent an evening driving around and enjoying the lights. The houses are so lovely. Some people are extreme in their decorating, but my favorite part is still seeing that lighted tree in the front window. Over the holidays I usually have a chance to see several of our friends’ homes and trees, and I never get tired of the experience.

Late in the Middle Ages, Germans and Scandinavians placed evergreen trees inside their homes or just outside their doors to show their hope in the forthcoming spring. Records have it that the first Christmas tree or Tannenbaum can be traced to France in 1521, though the Germans are most often credited with its origin. The first trees were decorated with apples, nuts, dates, pretzels and paper flowers for the pleasure of the wealthy people’s children.

George Washington didn’t have a Christmas tree. Many colonial religions banned celebrations, claiming that they were tied to pagan traditions. The New England Puritans passed a law that punished anyone who observed the holiday with a five-shilling fine. The Quakers treated Christmas Day as any other day of the year. The Presbyterians didn’t have formal services until they noticed that their members were heading to the English church to attend theirs! This sparked the Presbyterian Church to start their own. It was the Anglicans, Roman Catholics and Lutherans who introduced Christmas celebrations to colonial America. December 25th actually began a season of festivities that lasted until January 6th--the Twelve days of Christmas. January 6th was called Twelfth Day, and colonists found it was the perfect occasion for balls, parties and other festivals.

Some historians trace the lighted Christmas tree to Martin Luther. He attached candles to a small evergreen tree to simulate the reflections of the starlit heavens--the heaven that looked down over Bethlehem on the first Christmas Eve.

In the early 19th century, decorating a tree became popular among the nobility and spread to royal courts as far as Russia. Princess Henrietta of Nassau-Weilburg introduced the Christmas tree to Vienna in 1816, and the custom spread across Austria.

In her journal for Christmas Eve 1832, the delighted 13-year-old princess who later became England’s Queen Victoria wrote, "After dinner...we then went into the drawing-room near the dining room...There were two large round tables on which were placed two trees hung with lights and sugar ornaments, all the presents being placed round the trees." A young Victoria often visited Germany and most likely picked up the customs she enjoyed. A woodcut of the royal family with their Christmas tree at Osborne House, initially published in the Illustrated London News of December 1848, was copied in the United States at Christmas in 1850. Victoria was very popular with her subjects, and what was done at court immediately became fashionable--not only in Britain, but with the fashion-conscious east coast American society.

A German immigrant living in Ohio was the first to decorate a tree with candy canes. In 1847, Imgard cut a blue spruce tree from a woods outside town, had the Wooster village tinsmith construct a star, and placed the tree in his house, decorating it with paper ornaments and candy canes. The canes were all white with no red stripes.

Ornaments were made by hand during those early years. Young ladies spent hours quilting snowflakes and stars, sewing little pouches for secret gifts and paper baskets with sugared almonds in them. Popcorn and cranberries were strung on thread and draped as garland. Tin was pierced to create lights and lanterns to hold candles, which glowed through the holes. People hunted the general stores for old magazines with pictures, rolls of cotton wool and tinsel, which was occasionally sent from Germany or brought in from the eastern states. Small toys were placed on the branches. Most of the trees at this time were small at sat on a tabletop. They weren’t the six and seven foot trees we think of today when we think of Christmas trees.

A F.W. Woolworth brought the glass ornament tradition from Germany to the United States in 1890. The Christmas tree market was born in 1851 when a Catskill farmer by the name of Mark Carr hauled two ox sleds of evergreens into New York City and sold them all. By 1900 one in five American families had a Christmas tree, and twenty years later the custom was nearly universal.

In 1880 England, Christmas trees became a glorious hotchpotch of everything one could cram on and grew to floor-standing trees. They were still a status symbol, the more affluent the family, the larger the tree. The High Victorian of the 1890's was a child's joy to behold! It stood as tall as the room, and was crammed with glitter and tinsel and toys galore. Even the middle classes managed to over decorate their trees. It was a case of anything goes. Everything that could possibly go on a tree went onto it. Kind of like my philosophy: More is more. I decorated my tree Victorian this year, and it’s all about excess. My tree turns slowly, so I can sit and watch as all the ornaments come around for viewing.

Do you have memories of Christmas trees from your youth? Remember tinsel trees, those aluminum lovelies with the turning color wheel light that made it change colors? My grandma had one of those. I inherited a few of her decorations: A set of cardboard houses crusted with glitter that have tissue paper windows and a set of Santa and reindeer that were among the first products made from plastic.