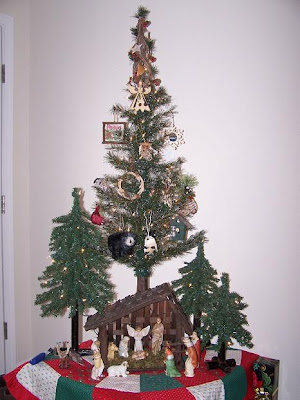 My friend Vicki just relocated and got moved into her new house, so I'm thankful she took time to take and send me a photo of her darling tree.

Vicki says: "This has been an exceptional year in so many ways, including how we're doing Christmas. This is the first year we haven't done a fresh-cut tree with 1400 mini-lights and a bazillion ornaments. It was just too much with the move and all, so instead we made a Christmas forest. There are four trees here. The biggest is decorated with 12 or so forest-themed ornaments, including a black bear, a squirrel, a rabbit and a chipmunk or two. The manger scene under the trees has a long family history and is dearly loved." 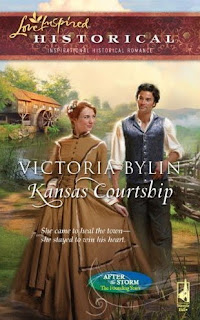 From Vicki: Kansas Courtship is scheduled for release in March 2010. I loved doing it! My heroine is a lady doctor who travels to High Plains, Kansas in 1858 to serve a tornado-ravaged town. There she meets the man who hired her without knowing her gender. The story is part of a broader series called “After the Storm.” The historical part of the continuity launches in January 2010 with Valerie Hansen’s High Plains Bride. Renee Ryan is doing the second book. Heartland Wedding releases in February 2010. Kansas Courtship is third. I’ve gotten sneak peaks at the books by Val and Renee. This is a powerful series!